Fort Bend County Municipal Utility District No. 129 (the “District”) is a municipal utility district created by order of the Texas Commission on Environmental Quality (the “Commission” or “TCEQ”), dated October 24, 2003, and operates under the provisions of Chapters 49 and 54 of the Texas Water Code and other general statutes applicable to municipal utility districts. The District is located wholly within the exclusive extraterritorial jurisdiction of the City of Missouri City, Texas (“Missouri City” or the “City”).

The District is part of the approximately 3,700-acre master planned community known as “Riverstone.” The District is one of several municipal utility districts planned to encompass Riverstone. At full development, Riverstone is projected to include single family, multifamily, townhome and commercial development. Development of Riverstone began in 2001. Recreational amenities within Riverstone include an amenity lake, walking trails, dog park, and a recreation center consisting of a pool, playground, tennis court and fishing pier.

The District is empowered, among other things, to purchase, construct, operate and maintain all works, improvements, facilities and plants necessary for the supply and distribution of water; the collection, transportation, and treatment of wastewater; and the control and diversion of storm water. The District may issue bonds and other forms of indebtedness to purchase or construct such facilities. The District is also empowered to contract for or employ its own peace officers and, after approval by the City, the Commission and the voters of the District, and to establish parks and recreational facilities for the residents of the District, to establish, operate, and maintain fire-fighting facilities, independently or with one or more conservation and reclamation districts.

The Commission exercises continuing supervisory jurisdiction over the District. The District is required to observe certain requirements of the City which limit the purposes for which the District may sell bonds to the acquisition, construction, and improvement of waterworks, wastewater, and drainage facilities and the refunding of outstanding debt obligations; limit the net effective interest rate on such bonds and other terms of such bonds; require approval by the City of District construction plans; and permit connections only to platted lots and reserves which have been approved by the Planning Commission of the City. Construction and operation of the District’s drainage system are subject to the regulatory jurisdiction of additional government agencies. 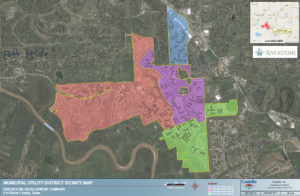 The Board generally meets on the fourth Monday of the month at the offices of The Muller Law Group, PLLC, 202 Century Square Boulevard, Sugar Land, Texas 77478.

For persons with questions or needing help regarding website accessibility, or to request the provided information in alternative formats, please call (281) 500-6050.